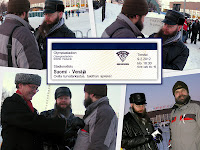 The Finnish Anti-Fascist Committee held a picket on 9 February 2012 in front of the Olympic Stadium in Helsinki, where the Finnish ice-hockey team met their Russian counterparts in an international match. Our organisation's activists handed out white ribbons and free tickets to supporters of Russia's national ice-hockey team. In addition, we handed out copies of Finland's Russian-language monthly newspaper, Novosti Helsinki.

During the picket, the activists of the Finnish Anti-Fascist Committee shouted slogans against Russia's current regime: "Russia without Putin! Russia will be free!" The Finnish Anti-Fascist Committee wishes to extend its warmest thanks to all the participants in the picket and the spectators of the match. We reserve a special thanks to the visiting ice-hockey fans from Russia and members of Finland's Russian minority, who received us with great sympathy.

Russia won the match with a score of 2:0.
Share This